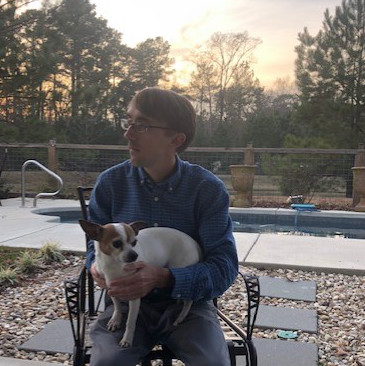 With that atypical background in mind, I will now recite some of the pivotal moments of my Christian journey from the beginning of my life to the present.

I was born and reared in a Christian household, and there is no time in my life in which I can say that I had a clear-cut conversion experience. I did pray some kind of salvation prayer in the back of my dad’s camper when I was 7 or 8. But a pivotal moment happened in my Christian walk when I was 14 and again when I was 21; those were the years when my decision to be a Christian became a much more conscious and deliberate one.

So, when I was 14, after having had a private Christian education for nine years, I transitioned from a Christian education to a secular one as I started high school. Almost immediately I was confronted by the reality that Christianity is not the only religion in the world. Although I had always known this, this marked the first time I had ever encountered non-Christians present the world from their point of view at length, with some of them even questioning Christianity in ways I had never seen before. I was unprepared for this transition, and I became filled with doubts and confusion. I felt lost as my belief system and my understanding of the world collapsed. And I was intimidated by how confident some non-Christians were in their arguments against Christianity. Was everything I had been taught about this world wrong? Some very intelligent people insisted so.

Fortunately, my older brother introduced me to Christian apologetics at this time, and my faith in Christianity eventually re-stabilized on a more solid intellectual foundation.

Over the next several years, I continued experiencing a tug-of-war between faith and doubt. For whatever reason, I seemed much more likely to experience doubt than most Christians I knew, and my doubts were sometimes incapacitating, even triggering depressive episodes at times. When I was having doubts, I would flee to apologetics and could not rest until I had answers to my questions. But not much time would pass before my questions were replaced by new questions. I would not understand until years later that I am a skeptic by nature, and so my doubts originated largely from having an inquisitive, doubtful personality and an inborn desire to think independently.

As the years went by and I continued struggling with doubts and questions, my exposure to Christian apologetics had let me know that, ultimately, Christianity stands or falls based on whether Jesus’ resurrection really happened. I was exhausted from wavering back and forth between faith and doubt and from the depression that this tug-of-war between faith and doubt was causing, but I reasoned that I would give Christianity one last chance. I would examine the historical evidence for Jesus’ resurrection more thoroughly than I had ever done before. And I would examine counterarguments from non-Christian scholars, because I wanted to try to be objective and give other people’s views a fair consideration. So when I was 21, that was what I did.

Years later, as I was studying the topic of cognitive biases in psychology in my free time, I understood with greater clarity that the non-Christian scholars who had rejected Jesus’ resurrection rejected it not so much because of lack of evidence, but because their philosophical stances do not allow supernatural events like Jesus’ resurrection to be part of this reality. In other words, those scholars are prejudiced, and are being driven unconsciously by their own bias against the supernatural. Most likely, these non-Christian scholars inherited this prejudice against the supernatural from European philosophers and other thinkers from the so-called Enlightenment. We are too sophisticated and evolved to believe that a dead man could come back to life after three days, right? So the thinking goes.

After having these realizations and other realizations, my struggles with doubt became much milder. I still experience doubts about Christianity from time to time, but the resurrection is usually what helps my faith to be stable in times of doubt.

My struggles with doubt and depression over the years forced me to become familiar with some darker aspects of life that flatly contradict the experiences of some other Christians in the American church who emphasize happiness and faith. I realized that there were other Christians in the church who were suffering in silence from things like depression and doubt, and there were far too many times when those suffering Christians were harmed by other Christians who did not understand them. I found comfort in darker books of the Bible like Job and Jeremiah, men who openly expressed their feelings of bitterness and resentment of God to God directly. Job and Jeremiah completely contradict the people in the church who say that you should be happy all the time and that you should not have doubts as a Christian. Does it surprise us to know that Job, Jeremiah, Moses, Elijah, and even the apostle Paul all had suicidal thoughts?

But in my own struggles with doubt and depression, I eventually became aware that there are Christians in other countries who are suffering in ways that I personally cannot understand, Christians who walk in a deep darkness I have never known—the persecuted church. Some American Christians try desperately to force the passages in the New Testament that mention persecution to fit our experiences, when the reality is that American Christians do not experience religious persecution to any notable degree. But Christians in countries like North Korea, Somalia, Saudi Arabia, and Afghanistan experience forms of religious persecution and suffering on a daily basis that are so extreme that I will not mention them in public, because it might traumatize the children in the room—and perhaps even some of the adults.

So I close with Hebrews 13:3, which many Christians consider to be a rallying cry for the persecuted church: “Remember those in prison as if you were their fellow prisoners, and those who are mistreated as if you yourselves were suffering.”